More than 47 million Americans resigned from their jobs in 2021, in what has come to be known as The Great Resignation. According to a Pew Research Center survey, 55% of those who quit went on to find new full-time jobs, while 23% switched to new part-time work.

More than half of these workers realized that they earned more, had more growth opportunities, and had a better work-life balance. Exactly 50% said they had more flexibility when choosing working hours.

In the wake of these seismic shifts in the labor force, seven in ten employed adults are currently engaged in a job search, either actively or passively. With such a sizeable percentage of the American workforce open to new job opportunities, it’s essential to have an efficient hiring system in place to acquire the best talent on the market.

This article will help you understand ten common hiring problems and teach you how to avoid them.

A lack of preparation does not only apply to a candidate. Interviewers must be well-versed with a candidate’s qualifications, experience, and achievements so that they can use the interview time to ask each candidate the right questions.

According to the US Bureau of Labor, a bad hire can cost a company at least 30% of the employee’s first salary. Not to mention the distraction and effect of demotivation it has on your team. Former Zappos CEO Tony Hseih estimated that bad hires had cost Zappos over $100 million in its early days.

With plenty of companies trying to find quality employees, an interviewer’s lack of preparation could cause their company to lose out on a strong candidate.

Consider this scenario: the interviewer is a recently promoted senior data scientist interviewing a candidate for another senior data scientist position. The interviewer feels that the candidate is more qualified than they are and develop a feeling of resentment towards the applicant, viewing them as a competitor or a threat. Having recently received a hard-earned promotion, the interviewer may believe that a new employee in a similar role could increase internal competition for growth opportunities.

As a result, the interviewer may not want to hire that particular candidate, even if they are ideally suited for the role. The company could lose out on a great hire and that candidate could end up at a rival company.

The interviewer in this hypothetical scenario has experienced social comparison bias. Humans tend to compare themselves with others, and employees involved in hiring prefer candidates who don’t compete with their own abilities.

There are several different types of biases that could pop up during the hiring process. A major bias that can emerge is confirmation bias.

Depending on their life experiences, human beings tend to formulate their own ideas, beliefs, and values that shape their reality. When individuals hold particular views, they try to look for ways to confirm or validate them in every interaction. This phenomenon is called confirmation bias. When an interviewer analyzes or processes information in a way that supports their views or preconceptions, they could be unknowingly engaging in confirmation bias during an interview with a candidate.

For example, if an interviewer thinks they’re currently speaking with the best candidate from the applicant pool, they may only ask questions that play to the candidate’s strengths rather than asking them probing questions.

Confirmation bias also includes a tendency to overlook evidence that contradicts personal beliefs. An interviewer who cannot identify red flags or spot candidate weaknesses due to confirmation bias might end up hiring the wrong candidate for the job.

It’s critical to be aware of such biases when making hiring decisions for the company’s long-term success.

A single appealing trait of a candidate can lead an interviewer to perceive their entire personality as favorable. As a result, interviewers might overlook any negative attributes. This is known as the halo effect.

For example, if an interviewer is impressed with a candidate’s ability to crunch numbers, they may ignore signs that indicate non-adherence to deadlines or tardiness. The interviewer’s positive impression of one facet of their candidacy can spill over to other areas that should be analyzed in an unbiased manner.

Alternatively, a single negative trait of a candidate can cause an interviewer to perceive their entire personality in an unfavorable light. This is called the horn effect. An interviewer operating under this bias may overlook a candidate’s positive attributes because of one dominant negative trait.

Under the influence of the halo or horn effects, an interviewer may not give a candidate a fair chance or might hire a candidate strong in one area but lacking in others.

The affect heuristic is a mental shortcut that people use to make decisions or jump to conclusions based on overriding emotions.

A quick fix for the affect heuristic is to have two interviewers evaluate a candidate, instead of one. The company benefits from two different perceptions of the same candidate, which counters the impact of biases or snap judgments.

You may have heard the adage: “The first impression is the last impression.” However, holding this view may be detrimental to the hiring process.

Short interviews or interactions designed to garner first impressions may only give you enough time to evaluate etiquette, extroversion, or grooming. However, these are superficial judgments that have little to do with a candidate’s ability to perform well in a particular role. Such misleading first impressions could negatively influence an interviewer’s decision and lead them to hire the wrong candidate.

Instead, taking the time to assess the candidate's qualifications, skill set, strengths, and weaknesses in a detailed interview will yield more fruitful results. Interviewers should avoid going through the hiring process on a hurried timeline.

It’s important to have realistic expectations when choosing a candidate. Interviewers tend to hold out for the ‘ideal’ employee, hoping to find a hidden gem amongst a sea of applicants. However, this is akin to finding a needle in a haystack.

The perfect candidate is a far-fetched idea; it’s likely that such a candidate doesn’t exist. Instead, look for a candidate who meets most of the criteria of the role you’re trying to fill. They don’t need to have all the underlying qualities that would make them an ideal fit for the job. A candidate with most of the required attributes and the potential to excel can be groomed for a particular position if provided with proper guidance and training.

8. Not tailoring questions for each candidate

Many interviewers are unaware of what to look for in a candidate. As mentioned earlier, a lack of preparation could lead some interviewers to depend on templates sourced from the internet to conduct interviews.

As an interviewer, don’t simply ask one question and move on to the next. This method will not extract information relevant to the job and will only show you a superficial view of the candidate. Instead, follow up on the candidate’s response to one question with further questions on the same topic to understand their work and background in more detail.

It’s particularly important to use this ‘follow up questions’ method to understand how the candidate perceives problems and thinks of solutions. For example, after asking the candidate to state their strengths and weaknesses, enquire how they would use a particular strength to solve a problem or how they might overcome a specific weakness to get out of a sticky situation.

Using follow-up questions effectively will allow you to gain more insight into how a candidate would perform on a day-to-day basis within your organization. You can keep following up with questions until you’re satisfied enough to make a judgment.

10. Not selling the company

The candidate is not the only one who should be pitching themselves during an interview. If there’s a strong candidate you want to recruit into your organization, you should do your best to present the company in an exciting light to convince them to accept any offer you are likely to make.

Strong applicants will always have multiple options available, so you want to be quick and efficient with extending job offers to secure the best candidates before losing them to other companies. Talking up the strengths of your organization and highlighting opportunities for growth within the company is a surefire way to attract top candidates.

However, be mindful that you don’t oversell the company, which could come across as arrogant or boastful. Instead, ask the candidate if they have any questions about the company and incorporate its USPs into your answers.

With over 11 million new job openings every month on average, companies must get their recruitment process right to stand out from the competition fishing in the same talent pool. It’s important for you to set up a standard operating procedure for interviews and for your team to be aligned on common goals. You can even run training programs for your recruitment team, incentivize existing employees to refer others, and consider using alternative recruitment solutions like AI tools and FloCareer.

CyberNews: “to win the war for talent, companies need to abandon many traditional practices” 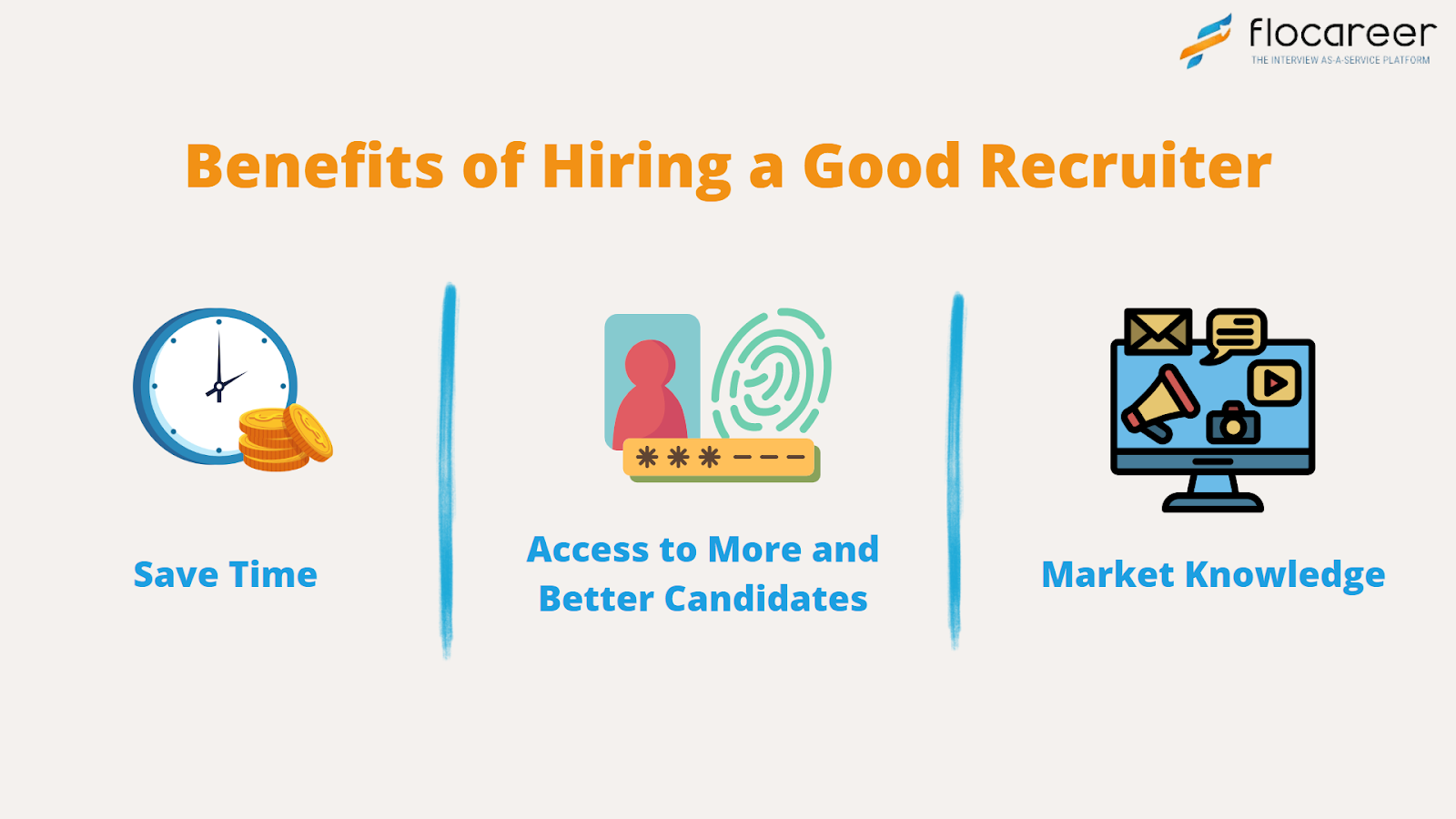 Four traits to look for in your next technical recruiter 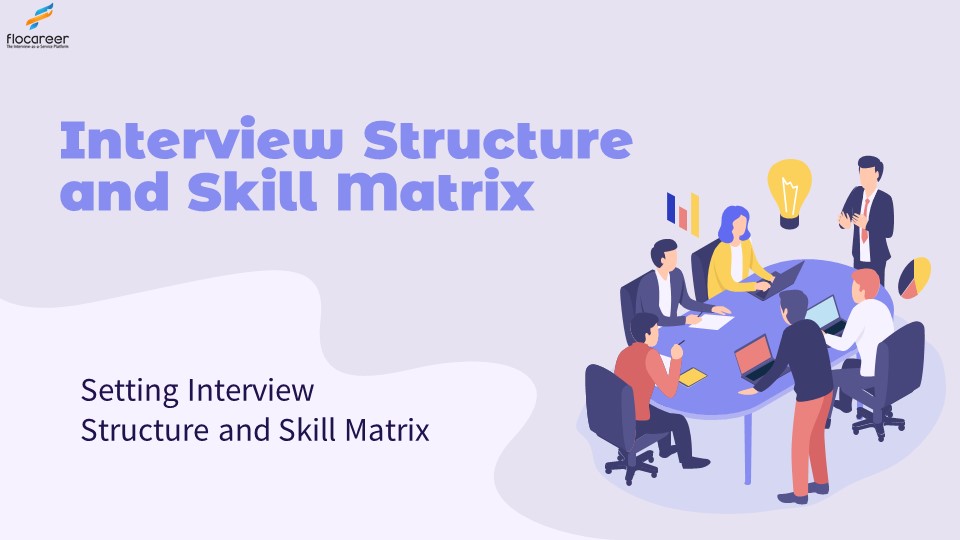